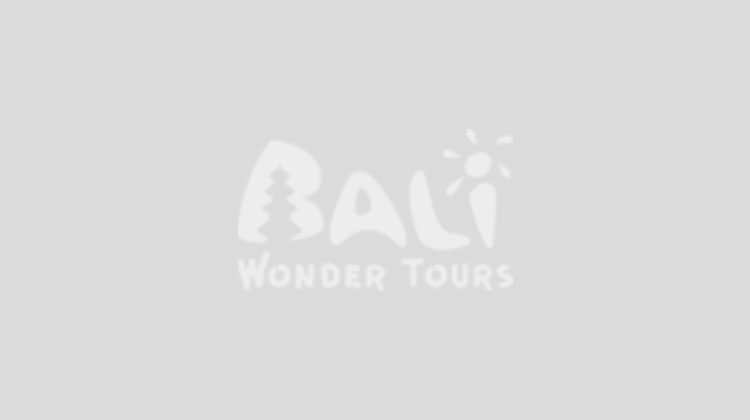 
Tenganan Village is one of the oldest Balinese traditional a village,Tenganan Village located in Karangasem  regency,east part of Bali - Indonesia.Tenganan Village is much referred by culture literature science of Tenganan pegringsingan,which is very famous in this island,Tenganan Village own very uniqe local community life pattern which is one example of Bali Aga village culture(Hindu Prehistory) and different with others country side in plain of Bali,and  Before the 1970s was known by anthropologists to be one of the most secluded societies of the archipelago.

Rapid changes have occurred in the Tenganan  village since the 1970s, such as the development of local communications by the central government, the opening up to tourism, the breaking of the endogamic rules. Tourists are attracted to Tenganan Village by its unique Bali Aga culture that still holds to the original traditions, ceremonies and rules of ancient Balinese, and its unique village layout and architecture. It is known for its Gamelan selunding music and geringsing double ikat textiles which is famous called by Ikat Pangringsingan that designed and arranged by the typical color.

According to legend, the people of Tenganan Pegringsingan were selected by the god Indra to administer a territory that was conceived in accordance with his divine plan to be a microcosm of the world. They were instructed to use every means to keep it pure and clean. The concept of territorial, bodily and spiritual purity and integrity is of paramount importance in the village.

Another variation of this legend is of the magical horse Uccai Srawa, of King Udayana, king of the 10th century kingdom of Swa Prabhu centered in Pejeng, Bedulu. The horse was to be sacrificed but escaped. The king was distraught and sent search parties out to find him. A group of ten trusted servants, men from the Peneges family were assigned to search the eastern area of the island in the area of Klungkung. The king had promised a huge reward to whoever found Uccai Srawa, however when they did find him, he had died of exhaustion. The king promised the finders that he would gift them the land for as far as the smell of the dead horse could be detected. The men of Peneges dismembered the horse and carried the parts to various places around the place where the horse had died. Unbeknown to the king's men, the Peneges men also slipped a portion of the horses penis into the clothes of the kings soldiers, so the scent of the dead horse followed them everywhere. The Peneges men brought their families to the place called ngetengahang which means middle of the low plains surrounded by hills, now known as Tenganan village


The Lay out of Tenganan village

Houses in Tenganan Pegringsingan village are built on either side of the north to the south concourse with their doors opening on to it. The entrances of the houses are narrow, only allowing one person to enter or leave at any one time. One enters the village through the gate on the southern end. On either side of the entrance are two small temples. Across from these is the long balé agung, where the administrative decisions for the village are made. Next to that is the drum tower, kul-kul. The kul-kul is beaten 21 times each morning to start the day. Up the center are a series of communal pavilions (balé banjar) for formal and informal meetings, ceremonial gatherings. At the northern end is the village temple Pura Puseh, the temple of origin.The people of Tenganan Pegringsingan are called Bali Aga—the original Balinese. They descend from the pre-Majapahit kingdom of Pegeng. There are strict rules as to who is allowed to live in the village. Only those born in the village can stay in the village and become full members of the community. There are rules regarding marriage and anyone who marries outside of the village has to leave. A strict protocol regarding marriages among the kin groups have steered the Tengananese through the genetic perils of intermarriage although with increasing contact with the outside world these rules have relaxed somewhat.

Many of the life-cycle rituals of the Tengananes village are similar to those of the Balinese in general, but have subtle differences. Some ceremonies are unique. One of the distinguishing features is the use of geringsing. By virtue of their magical qualities geringsing are not only capable of keeping impurities and danger out of the village, but also shield and protect humans from baleful influences during rites of passage as they transition from one phase of life to the next. The Tengananese receive their first geringsing at the hair cutting ritual. His hair is cut and placed in a basket which is placed on a folded geringsing on the balé tengah, on which the Tegananese both enters and leaves the world. In the ceremony that admits a boy or girl to the youth association of the village, they are carried in a geringsing cloth on their father's right shoulder. In the concluding ceremony of teruna nyoma which is the initiation, the candidates wear a geringsing and bear a keris. for the tooth filing ceremony, an essential rite of passage for all Balinese Hindu, the participants pillow is covered by geringsing. After death the genitals of the deceased are covered by a geringsing hip sash. These cloths may not be used again and so usually are sold . In the purification of the soul ceremony (muhun) the dead person's presence, which is symbolizes by an inscribed palm leaf, is also arrayed in a geringsing. In the wedding ceremony the groom invites his in-laws to visit his parents home where the couple, dressed in festal geringsing clothing while relatives bring symbolic gifts which are placed on a geringsing cloth

Another Interest place can be visiting during do Tour to Tenganan village :

* Bats Cave Temple : The temple with the cave in the cliff and thousand of Bats.

* virgin Beach : The beautiful with natural beach in east Bali. 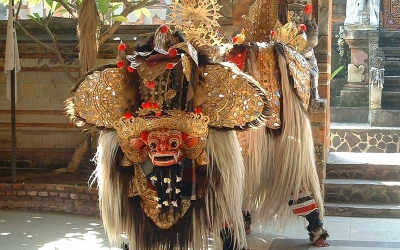 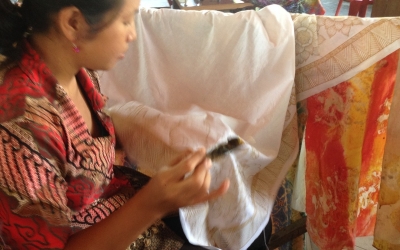 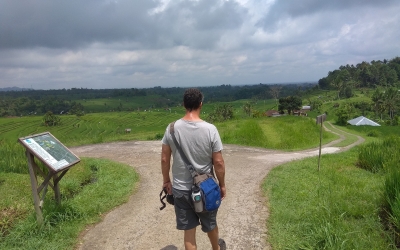